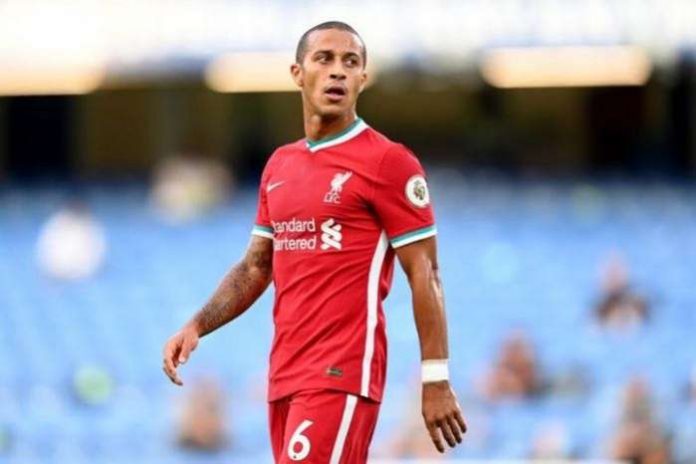 Thiago Alcantara is finally off the mark for Liverpool, with his goal duck broken in a Premier League meeting with Southampton, and the Spain international has been explaining his celebration.

At the 26th time of asking, following a move from Bayern Munich in the summer of 2020, the 30-year-old midfielder finally opened his account for the Reds in a 2-0 win over the Saints.

He could have been forgiven for an outpouring of emotion, or a display of understandable relief, but Thiago was eager to share his big moment with those that were not even on the field at Anfield.

Revealing to the Reds’ official website why he took off in the direction of the dugout after finding the target late on against Southampton, Thiago said: “For sure I have a special relationship with the guys there that didn’t play.

“When you are playing you always think about them, how they work and how they behave even when they don’t play, so the goal was for them [the players on the bench].”

Victory over the Saints has kept Liverpool in the hunt for a top-four finish.

Sadio Mane put the Reds on their way against his former club, but Jurgen Klopp’s side had Alisson to thank for keeping them in front as the Brazilian goalkeeper produced a number of important saves.

Thiago said of the South American shot-stopper and his value to the collective cause: “We have one of the best goalkeepers in the world here with us.

“And also the guys in front are not only scoring but also defending, so we have this balance that made us win games.

“Especially here at Anfield we have had many situations that they [the opposition] scored a goal; even though we dominated the game, they scored and then we break down a bit.

“With this result, 1-0, we get a bit, I would say, hectic [but] fortunately we could score the second one to bring a bit of calm to the game.”

Liverpool, who have lost their grip on the Premier League title this season, will be back in action on Thursday when taking in a rearranged meeting with old adversaries Manchester United.