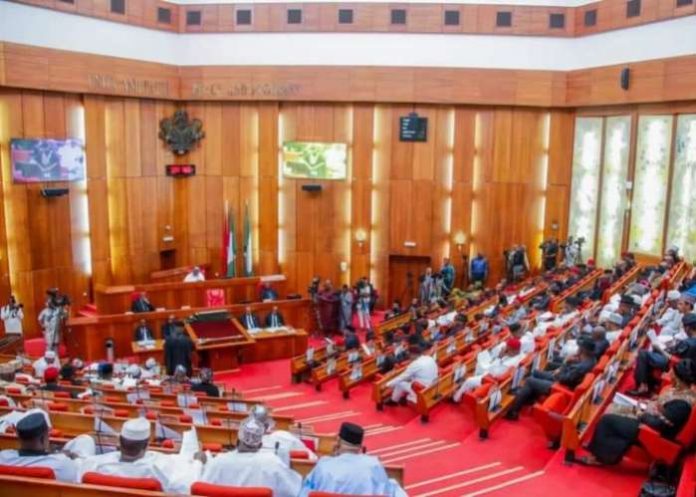 The Senate Wednesday passed the Asset Management Corporation of Nigeria Amendment bill after considering the report of its Committee on Banking, Insurance, and Other Financial Institutions.

The amendment bill passed by the upper chamber empowers the Assets Management Corporation of Nigeria to, among others, take possession, manage or sell all properties traced to debtors, whether or not such assets or property is used as security/collateral for obtaining the loan in particular.

It also empowers the corporation to access the Special Tribunal established by the BOFIA, 2020 for dealing with financial related matters.

According to him, the stakeholders in their submissions pushed for AMCON to be empowered to take possession, manage, foreclose or sell, transfer, assign or otherwise of property used as security for eligible bank assets among others.

This, he said, will provide for a quicker, easier and legitimate process of assets disposal.

The Deputy President of the Senate, Senator Ovie Omo-Agege (APC, Delta Central), during the clause-by-clause consideration of the bill, sought to know the rationale behind the recommendation of the Committee in clause two, which empowers AMCON to take possession of assets outside of those used as collateral in obtaining a loan request.

He said, “the essence of collateral, is that in the even of default, you lose that asset. What I am reading here is that in addition to seizing that asset, they (AMCON) want to go beyond that to every other asset or property that is traceable to the debtor. I think I need some clarifications to that.”

Another Senator, Bassey Albert Akpan (PDP, Akwa-Ibom North East) argued that you cannot go outside the asset presented for the facility.

On his part, Senator Adamu Aliero, explained that, “Mr. Chairman, if you can recall, during debate on this bill, Senators made it abundantly clear that these debtors are taking government money, and they are using it freely and going free, and we need stringent measures to be enforced to recover the money.”

The President of the Senate, Dr Ahmad Lawan, at this point, called for voice vote on the contentious clause, which eventually was adopted by majority of the Senators following Lawan’s ruling.

After the passage of the bill, Senators Bassey Akpan and Chukwuka Utazi, while relying on Point of Order 73 contested the ruling of the Senate President by requesting for a division.

Utazi, kicked against the clause empowering AMCON to take possession of assets traced to debtors, explaining that most of the banks that have those bad debts colluded with the customers in doing that in the first place.

Interjecting, Lawan said, “when we come to legislate, we all come here with very clear mind, that we are doing this for our country, we don’t have any interest but the national interest. And when majority of our colleagues here in their judgement feel that this is the right thing to do, that’s the majority view, unless we have any cause to reverse ourselves.

”If the majority of Senators say this is what they feel should be done to remedy a situation that requires our attention, I think we should allow that. And besides, I believe we had explanations from the Committee members who went through all the processes, so, I believe that we should let it go. Let the people go to court to test it, but our hope and desire is for AMCON to be able to recover huge sums of money – trillions that people have taken and now is on the head of Nigerians. And, it is criminal, really. People will consciously take money. I will advise that we stick to our decision.”

On their part Bala, Senators Bala Ibn Na’Allah (APC, Kebbi South) and Opeyemi Bamidele (APC, Ekiti Central), advocated for the inclusion of a provision amid the AMCON amendment, so as to give it precedent over any other law that may be used to cite an instance of conflict.

Na’Allah opined that they have to put a clause to say, ‘not withstanding the provisions obtained in any other law to enable the law take effect.

Senator George Thompson Sekibo (PDP, Rivers East), while citing the Senate rules, observed that it will be out of order to reconsider any specific question, upon which the Senate has come to a conclusion during the current session, except upon a substantive motion or decision.

He said, ”All the discussion we are making on it now is of no value, they are not supposed to be recorded because we have come to a decision on it. It may be wrongly or rightly, but we have ended it”.

The Senate President, thereafter, ruled in favour of provision of the Senate Rule cited by Sekibo, and the Bill was passed.