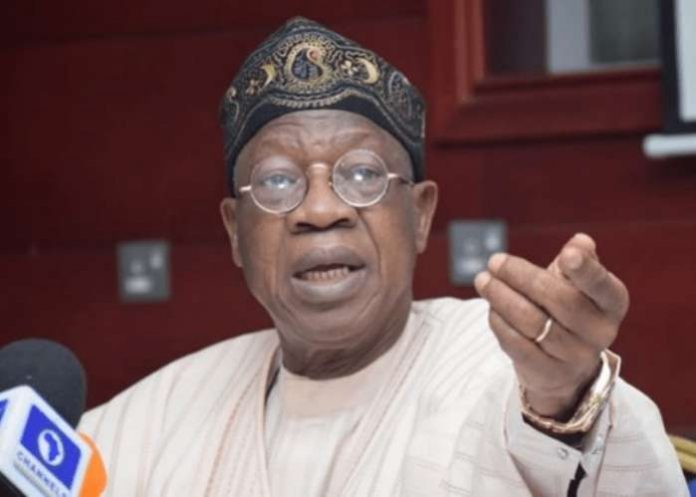 The Federal Government says some unpatriotic elements are encouraging insecurity in some parts of the country.

The Minister of Information and Culture, Alhaji Lai Mohammed stated this at a news conference on Tuesday in Abuja.

Mohammed, however, assured that Government was resolutely tackling the situation and security “will improve drastically in the days ahead’’

“The truth is that the insecurity in some parts of the country is not organic, so to say.

“Some unpatriotic and disgruntled elements are definitely catalysing them.

“But these people do not constitute the critical mass that can influence the course of our country’s history, and we must not cede the space to them.

“Nigerians must be forthcoming with information that can lead to the arrest and prosecution of these anarchists. Security is the business of all,’’ he said.

Mohammed said the security agencies, acting on the directives of President Muhammadu Buhari were taking concrete actions that will significantly reduce the level of insecurity nationwide.

He assured that the citizens will feel the impact of the security agencies’ actions in the days ahead.

The minister said the attack on the police headquarters and a correctional facility, in which hundreds of inmates were freed, in Imo State on Monday “is most unfortunate, dastardly, condemnable and unacceptable’’.

“This attack fits into the growing pattern of inexplicable and anarchical acts by some malcontents, who seem bent on triggering chaos across the land,’’ he said.

He called on all persons of goodwill, especially traditional, religious and political leaders, to speak up against the anarchists before they throw the country into chaos.

“Nigerians must fish out those who are acting as ‘agent provocateur’ for reasons best known to them.

“We must not allow them to win,’’ the minister said.