Real One thanks sponsors for prize money at GOtv Boxing Night 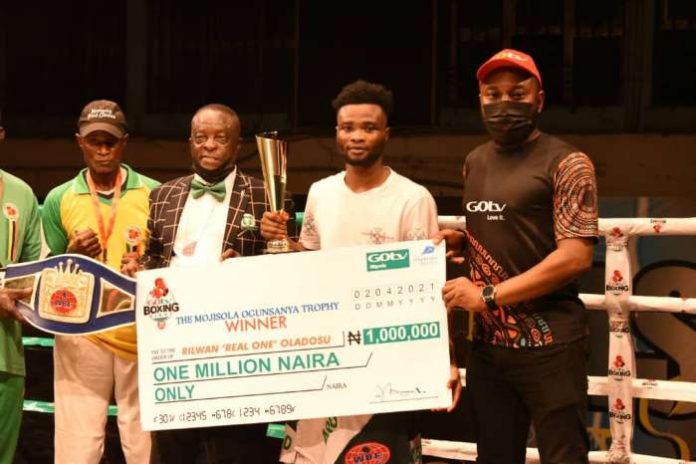 Reigning World Boxing Federation (WBF) world super featherweight champion, Rilwan ‘Real One’ Oladosu, has thanked the organisers of GOtv Boxing Night for the N1 million prize awarded to him at the event.

Oladosu emerged the WBF world super featherweight champion when he defeated Emmanuel ‘Akufo Addo’ Quartey of Ghana via a ninth round knockout at the Mobolaji Johnson Indoor Sports Hall of Rowe Park, Yaba, Lagos, on Friday. His performance earned him the Mojisola Ogunsanya memorial trophy and N1 million cash for the best boxer of GOtv Boxing Night 22.

The new world champion lauded GOtv for the prize, noting that it is an honour for him to be recognised out of all the boxers at the event as the best on the night.

“I am grateful to GOtv for recognising me as the best fighter of the event and following it with the trophy and prize money. It is not an easy feat as I contested for a world title and my opponent gave me a tough time, but I was still deemed worthy to have won that award. It’s great to have won the award alongside the WBF title and I thank the sponsors for this honour,” he said.

Oladosu also commended GOtv for their support for Nigerian boxing through the sponsoring of the event, saying it has and continues to raise both the level of boxing in the country and the profile of Nigerian boxers.

Another Nigerian, Rilwan ‘Babyface’ Babatunde, also emerged the WBF world welterweight champion as he knocked out Tanzania’s Mkalekwa Salehe Omari in the ninth round of the title bout.