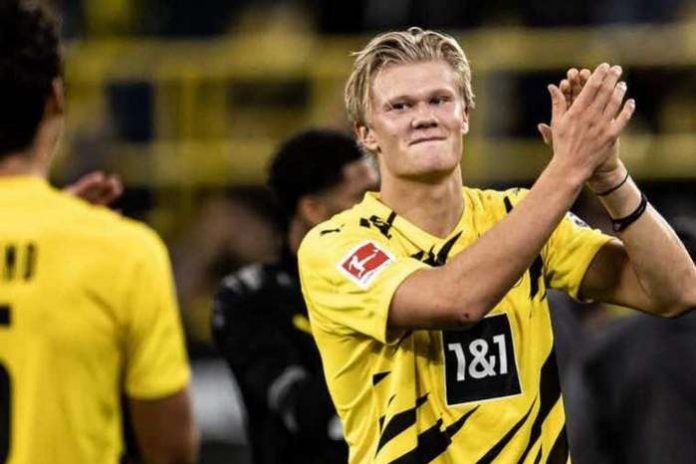 Barcelona could be set to steal a march in the race for Erling Haaland after the player’s representatives began talks with the club.

On Thursday morning, the striker’s dad and advisor Alf-Inge Haaland and agent Mino Raiola were spotted at Barcelona El-Prat Airport.

According to Spanish outlet Sport, the pair were whisked away in a car driven by club president Joan Laporta’s personal assistant.

The newly-elected Barcelona chief hinted at a move for the Borussia Dortmund striker before winning the post last month.

The club is dealing with a difficult financial situation while also attempting to renew Lionel Messi’s contract, which expires in June.

But reports suggest Raiola and Laporta hold a strong working relationship, potentially standing them in good stead to win the race for Haaland.

According to Fabrizio Romano, the player’s camp held talks with Borussia in recent days to determine his future.

And Onda Cero report on Barcelona viewing signing Haaland as ‘possible’ after the two-hour meeting, which was their first contact over the deal.

SunSport revealed this week that a deal to sign the 20-year-old could cost as much as £300million.

That includes a £150m transfer fee, which Barcelona reportedly want to knock down to £125m, and a five-year contract featuring £600,000-a-week wages.

Manchester City, where dad Alf-Inge used to play, are another club thought to be targeting the striker.

Sergio Aguero’s imminent exit will open up a big hole in Pep Guardiola’s attack with Haaland joining Harry Kane, but not Messi, on their shortlist.