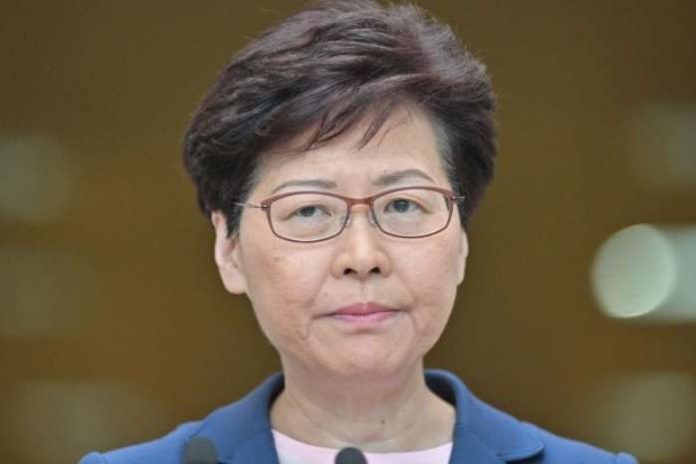 Hong Kong’s chief executive Carrie Lam has “fully” welcomed China’s planned changes to the city’s electoral system and hinted the reforms could further delay a vote for the territory’s legislature.

China’s rubber-stamp parliament, the National People’s Congress (NPC) is expected to approve on Thursday a resolution that will reduce democratic representation in Hong Kong institutions and vet any candidates for “patriotism”.

Speaking to reporters on Monday, Lam also ruled out any need to consult the Hong Kong public on the changes.

The measures will tweak the size and composition of Hong Kong’s legislature and the committee selecting the chief executive further in favour of pro-Beijing figures.

The electoral committee will also be given powers to select many of the legislators.

Currently, half of Hong Kong’s legislature, known as the Legislative Council or LegCo, is directly elected by voters. However, the opposition camp’s mass resignation from the council last year to protest the expulsion of four of their colleagues means the body is now entirely controlled by Beijing loyalists.

“The improvements to the electoral system are not designed to favour someone, it is designed to ensure that whoever is administering Hong Kong is patriotic,” Lam said at a news conference after she returned from the NPC meeting in Beijing.

“The decision is timely, necessary, lawful and constitutional, and the central authorities’ leadership and decision-making power are out of the question.”

Lam declined to elaborate on the views she had shared with the central authorities regarding the electoral reforms and said many pieces of legislation in Hong Kong would have to be amended.

“At the moment I’m not yet in a position to tell you whether we could adhere to September 5, 2021, as a day for the general election of the Legislative Council,” Lam told reporters, adding the priority was to implement whatever changes Beijing decides on first.

The vote for the LegCo was initially scheduled for September 2020 but was delayed for at least a year, the government citing concerns over the coronavirus pandemic.

Lam said her government would launch an “intensive” drive to explain the electoral changes.

But she said there was no need for a “so-called extensive public consultation”, arguing the transformation of Hong Kong’s political system was “urgent” and was being spearheaded by the central government.

Hong Kong has in recent months cracked down on dissent, and most of the city’s opposition figures – including pro-democracy activists and former legislators – are in jail or in exile.

About 100 people, most of whom are pro-democracy activists and supporters, have been charged under the city’s sweeping national security law since it was implemented in June. The NPC imposed the law on Hong Kong, bypassing the LegCo, saying it was necessary to restore order after increasingly violent pro-democracy protests in 2019.

The legislation criminalises what it terms as secession, subversion, collusion with foreign forces to intervene in the city’s affairs, and terrorism.

With any holder of public office now set to be vetted for their “patriotism”, political parties disbanding, democratic politicians either in jail or in exile, and institutions stacked with pro-Beijing figures by design, it is unclear what room will be left in the city for any opposition.

Critics have decried Beijing’s moves as the end of the road for democratic dreams in Hong Kong, whose mini-constitution states universal suffrage as its goal.

But Lam said the measures will improve the city’s ability to govern itself.