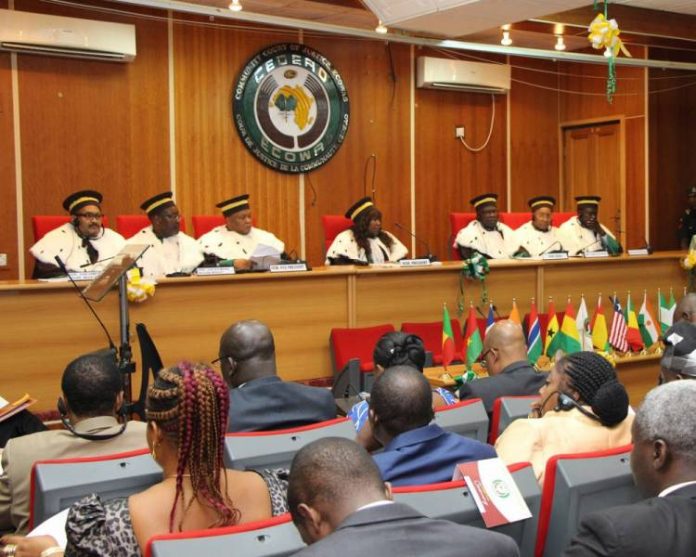 The ECOWAS Court of Justice has ordered Nigerian government to pay a German national about N63.6million and $10,000 for his about 11 days of illegal detention by the Nigerian Immigration Service (NIS) last year.

Martin Gegenheimer married to a Nigerian citizen but based in Nairobi, Kenya, had in his suit filed at the court in Abuja claimed that he was illegally detained between February 24 and March 4, 2020.

Gegenheimer, a professional aviator with specialisation in commercial airline start-up, had said he was arrested at the boarding gate of the Kenya Airways aircraft while leaving for Nairobi on February 24, 2020.

He said his passport was seized and he was held in a jam-packed detention despite the COVID protocol” and “without acceptable food as well as medical care.”

A statement by the information unit of the ECOWAS Court in Abuja said on Friday that a three-man panel of the court delivered its judgment on Thursday upholding Gegenheimer’s case.

The panel headed by Edward Asante ordered the Nigerian government to pay N 53, 650,925 to Mr Gegenheimer as special damages “for various losses suffered and costs incurred while under unlawful arrest and detention” by the NIS.

The cost also covers hotel expenses incurred after he was granted bail on March 4, 2020.

The court, which had Dupe Atoki and Januaria Costa, serving as co-panel members, awarded another N10 million in general damages as “reparation for all violations and moral prejudice suffered for the violation of his rights.”

It also ordered as another $10,000 as the expenditure he incurred by the applicant to secure his bail.

The court also ordered the “immediate and unconditional release” of the German’s passport “arbitrarily and unlawfully” seized from him by the Nigerian government.

It also ordered his removal from the government’s watch list.

The court, however, rejected the plaintiff’s claim about the violation of his right to freedom from torture, which it ruled was not supported by evidence.

Gegenheimer had, along with SAT Swiss Aviation Nigeria Ltd, the company which invited him to Nigeria, filed his suit against the Nigerian government for the violation of his rights.

In the suit marked ECW/CCJ/APP/23/20 field through their lawyer, Festus Ogwuche, the applicants contended that the German had legally entered Nigeria for business purposes, but was wrongfully arrested and detained while on his way back to Kenya.

Mr Gegenheimer said he had lived in and outside Nigeria and carried on business in Nigeria, Kenya and Africa at large since 1990.

He said he was requested to come to Nigeria for business negotiations and obtained the necessary approvals for visa on arrival to legally enter Nigeria.

According to him, he arrived at Murtala Muhammed International Airport (MMIA) Ikeja, Lagos via Kenya airways flight number KQ 532 on February 9, 2020 and was officially issued with a one-month Business Visa number E0014938 at the visa-on-arrival counter by the officials of the NIS.

He said while returning to Kenya on February 23, 2020, he was stopped at the boarding gate of the Kenya Airways aircraft after all necessary departure formalities were completed.

He said he was arrested, his passport seized and detained in a jam-packed detention cell between February 23, 2020 and March 24, 2020 without regard for COVID-19 protocol.

The applicant alleged that he was not informed about any justifying circumstances recognised by law neither was a warrant of arrest nor court order produced as the basis for his arrest and detention.

He added that he was not afforded the opportunity of fair hearing before any lawful authority or competent court.

According to him, it was not until March 4, 2020, that an administrative bail was secured for him in the face of the pending COVID-19 lockdown in Abuja.

He said the bail condition was “very stringent” as he was asked to periodically report at the detention centre while his German passport was retained in the custody of the Comptroller General of Nigeria Immigration Service.

He added that he had to rely on the services of a professional immigration consultant to secure his release after spending over $20,000 in employing different lawyers.

He said because of the seizure of his passport, he was confined to Abuja where he had been staying in a hotel.

But the Nigerian government, through its counsel, J.A, Adamu, raised a preliminary objection arguing that Mr. Gegenheimer being a German and not a West African citizen, lacked the capacity to file the suit at the ECOWAS Court.

Justifying the treatment meted out to him, the government said he was detained for presenting a standard Nigerian passport bearing his photograph and other details, but which when scanned, revealed the name, passport photo and detail of one Tanimu Aisha, a female Nigerian citizen.

The government added that after conclusion of investigation, a charge was filed against Mr Gegenheimer at the Federal High Court, Abuja Judicial Division, in suit marked FHC/ABJ/CR/152/2020.

It said the criminal case was being processed for a hearing date.

The government denied the applicant’s claim of poor treatment at the screening centre, where he was first held.

It said he was well catered for and provided with food and all basic comforts during his stay.

It also denied all other sundry allegations of violation of the applicant’s rights.

The court in it its 48-paged judgment dismissed all the claims of the respondent.