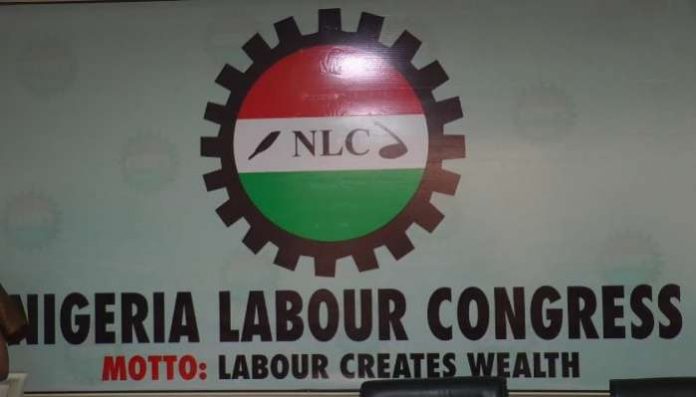 The Nigeria Labour Congress, NLC, Tuesday, threatened that it would mobilize Nigerian workers to embark on industrial action over an alleged attempt to transfer minimum wage to the concurrent list.

It also threatened to picket fuel station over alleged hoarding of petrol by filling stations thus creating a scarcity of the product in the country.

The National Executive Council, NEC, of NLC, said the nationwide strike could be halted if only the National Assembly back down on its efforts at passing into law, a Bill seeking movement of the minimum wage from the Executive Legislative List to the Concurrent Legislative List.

NLC President, Comrade Ayuba Wabba, speaking at the end of an emergency NEC meeting held virtually on Tuesday,
warned against any attempt to move the minimum wage to a concurrent list.

According to him, the attempt to transfer minimum wage to a concurrent list was an attempt to plunge the country into chaos and make Nigeria a laughing stock in the international community.

He noted that minimum wage was a global standard.

Wabba who said the political class were the major problems of Nigeria’s unity and progress, described as unfortunate, the move by the political class seeks to further worsen the precarious situation of Nigerians by declaring a war against the working class and prosecuting same by attacking the core rights of workers.

According to him, the major reason behind the call to move the minimum wage to the Concurrent Legislative list was to enable states to negotiate and fix their minimum wage, which may not be into cognisance, protection of employees in government and organised private sector, and particularly, the unorganised, the unskilled and the vulnerable in the highly un-governed space known as the informal sector.

He said: “The attention of the entire working class in Nigeria has been drawn to a bill which was listed in the House of Representatives as HB 950. This bill which was sponsored by Honourable Garba Datti Mohammed of Sabon Gari Federal Constituency, Kaduna State had passed the 1st and 2nd reading in February 2021.

“The NEC considered that the bill is a classic case of the Hand of Esau and the Voice of Jacob as it has all the imprimatur of anti-workers forces in the political establishment. The NEC considered Hon. Garba Datti as only a hireling in the plot by his sponsors to disorient, injure, and exterminate Nigeria’s working class.

“The NEC called on President Muhammadu Buhari not to allow fifth columnists masquerading as politicians to derail his government by railroading the legislature into removing the national minimum wage from the exclusive to the concurrent list – a move that the global worker’s solidarity regards as anathema.

“After careful consideration of the issues before it especially in light of their implications to the working-class family and the masses of our people in Nigeria, the NEC decided that there will be a national protest action commencing from the 10th of March 2021 in the Federal Capital Territory and especially to the National Assembly.

“The protest is to make a strong statement that Nigerian workers would not lie low and watch hard-fought rights which are of global standards bastardized by opportunistic and narrow thinking politicians;

“The NEC resolved that the national protest action will be concurrently held in all the 36 states of the federation and to the different State Houses of Assembly across Nigeria;

“The NEC decided that should the need arise; it has empowered the National Administrative Council of the NLC to declare and enforce a national strike action especially if the legislators continue on the ruinous path of moving the National Minimum Wage from the Exclusive Legislative List to the Concurrent Legislative List.

The Labour leaders also rejected in its totality, a bill with the number HB. 1062 sponsored by Honourable Abbas Tajudeen representing Zaria Federal Constituency of Kaduna State, seeking a constitutional amendment to allow for the establishment of State Judicial Councils.

“The NEC submitted that the passage of the bill would occasion a further exacerbation of the institutional crisis in our country, constitute an existential threat to our democratic experience and greatly imperil the corporate existence of the Federal Republic of Nigeria.

“The NEC condemned and rejected in its entirety the ploy to decentralize Nigeria’s judiciary through the establishment of State Judicial Councils describing the move as unpatriotic, self-serving and an attempt to throw Nigeria into judicial and social chaos

On the hoarding and artificial scarcity of petrol by marketers in major cities, NEC vowed to picket filling stations found wanting, while lamenting the great hardship it was imposing on an already suffering and traumatized Nigerian workforce and people who were being punished and further impoverished in order to satisfy the greed of a few marketers of refined petroleum products.

“The NEC called on relevant regulatory agencies of government to rise up to the protection of the interests of the majority of Nigerians from the exploitative hands of market forces who are bent on making maximal profits from the sufferings of fellow citizens;

“The NEC warned that should the current artificial scarcity persist that the various leadership structures of the NLC should picket petrol stations found to be inflicting pains on Nigerians, and the NEC resolved that all the resolutions and decisions adopted at the emergency meeting should be pursued in collaboration with the Trade Union Congress (TUC) in the overall interest of all Nigerian workers.”