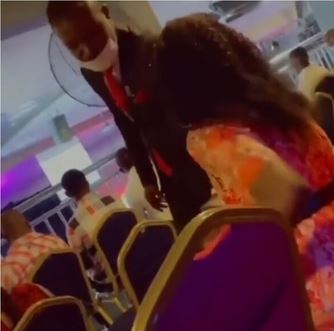 The church usher tried to seize her phone

A video has emerged online showing the moment a church usher caused some stir when he tired to seize a lady’s phone.

The usher is currently being ridiculed on social media after the video surfaced online which showed him trying to take away the church member’s phone.

According to the gist, the lady was seen using her phone during church service and this did not sit well with the usher.

However, rather than caution her against using the phone during service, he made an attempt to grab the phone but the attempt failed as it was met with stiff resistance from the lady who refused to let go.