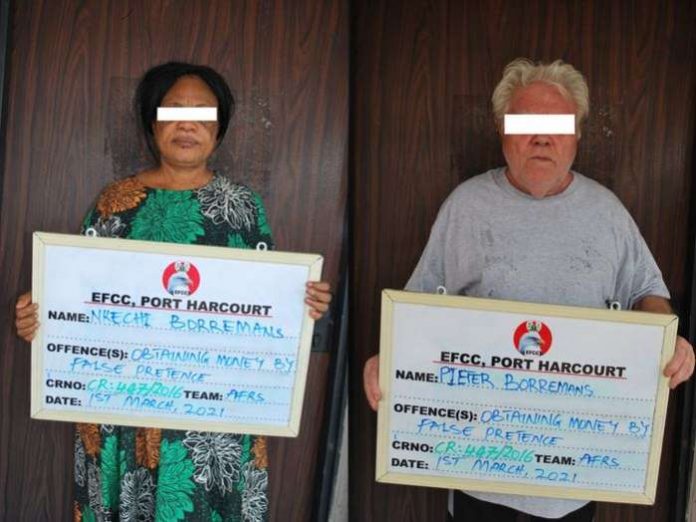 The Economic and Financial Crimes Commission (EFCC) on Tuesday arraigned a Dutch, Peiter Borremans, and his wife, Nkechi Borremans, on fraud charges involving $330,000.

They alleged that the defendants received the money, equivalent to about N125.7million at official exchange rate, for the sale of a marine tanker vessel which they were said to have failed to deliver to the buyer.

The commission said in a statement that the duo was arraigned alongside their firm, Lagon Trade Limited, on two counts of conspiracy and obtaining by false pretence.

According to the statement, the defendants pleaded not guilty when the charges were read to them before E. A Obile of the Federal High Court, in Port Harcourt, Rivers State.

The anti-graft agency said investigation into the alleged crime followed the complaint by a petitioner who alleged that his companies Jackkyson Multi Services Limited and Alot General services Limited, allegedly offered to purchase a marine tanker vessel from Lagon Trade Limited for $1,100,000.

The petitioner was said to have made a part payment of $330,000 for the vessel.

The defendants allegedly vanished into thin air after collecting the money and all efforts to get a refund or delivery of the vessel proved abortive.

The EFCC said their offence is contrary to Section 1(1) (a) and (2) of the Advance Fee Fraud and Other Fraud Related Offences Act 2006 and punishable under Section 1(3) of the same Act.

One of the counts reads: “That you, Peiter Borremans, Nkechi Borremans, and Lagon Trade Limited, on or about the 31st day of July 2014 at Port Harcourt within the jurisdiction of this Honourable Court with intent to defraud did obtain the sum of Three Hundred and Thirty Thousand Dollars ($330,000:00) only from Jackkyson Multi Services Limited and Alot General Services Limited, as advance payment meant for the purchase of Marine Tanker Vessel, a pretext you knew to be false and thereby committed an offence contrary to Section 1(1)(a) and (2) of the Advance Fee Fraud and Other Fraud Related Offences Act, 2006 and punishable under Section 1(3) of the same Act.”

RelatedNews
Given their pleas, prosecuting counsel, N.A Dodo, urged the court to adjourn the case for commencement of trial.

He also urged the judge to remand the defendants in a correctional centre.

Responding, defence counsel, C. A Okowanya, prayed that the defendants be remanded in EFCC custody due to the second wave of COVID-19.

The judge ordered the defendants to be remanded in EFCC custody and adjourned the matter till March 31 for trial.